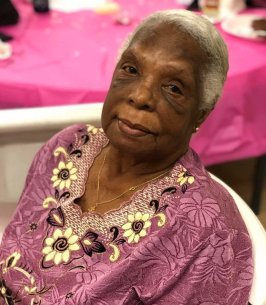 Florie B. McFarlane was born on May 30, 1937 to the late Egbert Black and Iris Goodlitt in Westmoreland, Jamaica, where she was also educated. She later relocated to Montego Bay, Jamaica where she met Byron E. McFarlane. There a love story began and they got married in 1960 and later moved to Flower Hill, Jamaica. From their union, they had seven children. She later moved to Pennsylvania, USA in 1968 where she was employed as a Caregiver with the Tippets for a number of years. She then migrated to Florida in 1972 with the Tippets where she worked at Arnold Bakery in Riviera Beach, FL for 15 years, while also working as a Caregiver until she retired in 2007.

She joined Mt. Calvary Baptist Church, West Palm Beach, FL and was a member for 50 years. She was a member of Missionary Society at Mt. Calvary. She loved her church and occasionally served on the choir. She was very devoted and went to church faithfully until her health began to decline. On the morning of June 23, 2022, our Heavenly Father called her home. Although gone from this earthly body, the memories made and shared with everyone will forever be in our hearts. Florie McFarlane was a sweet, kind spirited, virtuous woman and was loved dearly.