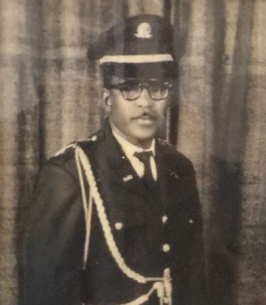 Sabat Jean-Charles was born in Anse-Rouge, Haiti to the proud parents of Sebastien Jean-Charles and Elucie Etienne. He was the youngest of nine children.

He attended school in Gonaives, Haiti from elementary to high school. After high school, he moved to Port-Au-Prince which is the capital of Haiti, where he enlisted in the Haitian army. While in the army, he met the late Anercine Petit-Homme which later resulted in their nuptials. Five children came from this union: Widmarck, Jessie, Romane, Harry and Jude .

In the army, Sabat was placed in the artillery division where he excelled and perfected his shooting skills. Because of his fast learning and leadership abilities, he quickly moved up the ranks to becoming a lieutenant. After his tour of duties he moved to New York with his family, where he and his wife worked various jobs tirelessly in order to provide their children with food and education for their sustainable future.
Despite his large family, Sabat always found a way to lend a helping hand to other family members and friends who needed his help.